Spain are World Champions! A single goal by Iniesta just four minutes from the end of extra time of the final against Holland gave La Roja the world title for the first time in their history! (11.07.10)

Spain come in to this year's World Cup as one of the strong favourites, especially after winning the European Championship in 2008. The block of players from that tournament has been strengthened further by more talented youngsters, and with experienced coach Vicente Del Bosque continuing on from Luis Aragonés, they will be hoping that this will be their year to win the trophy for the first time. (10.06.10)

Spain finished champions of their group with a 100% record, and were one of the top seeds for the finals. They were drawn in to group H together with Honduras, Chile and Switzerland, a group they are expected to get through. However if they do make it to the knock-out stage they will face a team from group G, which includes, Brazil, Portugal and the Ivory Coast. (04.12.09)

Last year's World Cup is already ancient history, and we are looking forward to the new edition, which will take place in South Africa in 2010. The draw was made for the qualifying rounds today, with Spain being seeded and drawn in European group five together with Turkey, Belgium, Bosnia-Herzogovina, Armenia and Estonia. Follow the link below for details of the fixtures. (25.11.07) 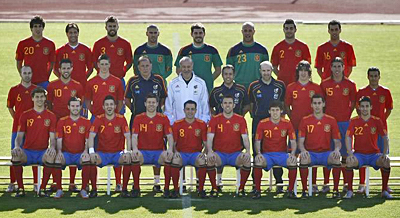