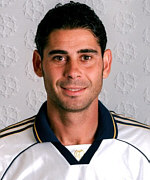 Nobody will deny that Hierro is getting a bit long in the tooth. Recent back injuries have kept him out of the Real Madrid side, and his legs aren't quite as quick as they used to be. However the defensive powerhouse is a vital part of both Real Madrid's and Spain's machine-rooms, and neither function perfectly without him.

Born in Málaga on the Costa del Sol, Hierro started his career in Valladolid. One of two footballing brothers making headlines at the time, Barcelona made the mistake of signing the wrong one, and Fernando went to Madrid a bit later in 1989 and has never looked back.

Really a defensive midfield player, Hierro is comfortable either in the back or the middle lines, although nowadays he usually plays in the middle of the defence, coming forward as and when needed. A phenomenal dead ball specialist, he is the first choice penalty taker for Spain, and is usually called upon whenever there is a scoring chance from a free kick. This brings him many goals, and in his first 12 seasons with Real Madrid he scored 89 times. Now club captain, he has won two Champions Leagues, one Intercontinental cup, three league titles and one Spanish cup.

His first game for Spain came in September 1989 against Poland, and he is the second top goalscorer for his country (equal with Alfredo Di Stefano) with 23 goals in 68 games, an unbelievable record for a defender. Took over as captain for his country after his Madrid teammate Sanchís left the international scene.