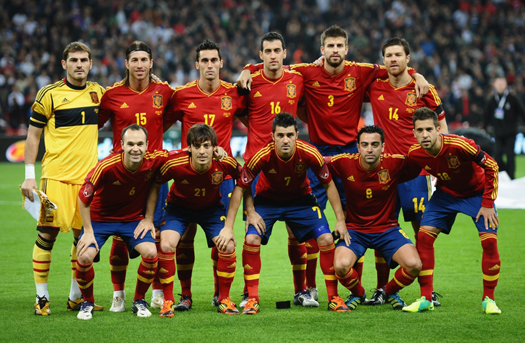 Spain are triple champions! After winning the 2008 Euro finals and the 2010 World Cup, Vicente Del Bosque's team beat Italy 4-0 in the final in Kiev to become the first side to win the tournament twice in a row! Enhorabuena Campeones! (01.07.12)

A perfect record for Spain in the qualifiers, with eight wins out of eight. The draw for the finals paired them with Italy, Croatia and Ireland in group C. (02.12.11)

Spain start off the defence of their European title against Liechtenstein in September after the group stage was confirmed today. Vicente Del Bosque's side have been drawn in group I together with the Czech Republic, Scotland, Lithuania and Liechtenstein, one of the smaller groups of the competition. The nine group champions will qualify for the finals in Poland and the Ukraine in summer 2012 together with the highest ranked second placed side, with the eight other runners up playing off for the four remaining places. (19.02.10)