No sooner has one World Cup ended than another begins. The draw was made at the end of 2003 for the 2006 edition which is to be played in Germany, with Spain being seeded and drawn in European group seven with Belgium, Serbia and Montenegro, Bosnia Herzogovina, Lithuania and San Marino. The six countries met mid January to set the calendar, which is detailed below. (20.01.04)

Spain beat Slovakia in the play-offs to qualify for the finals. Luis Aragonés's side were seeded, and drawn in group H together with Ukraine, Tunisia and Saudi Arabia. (09.12.05) 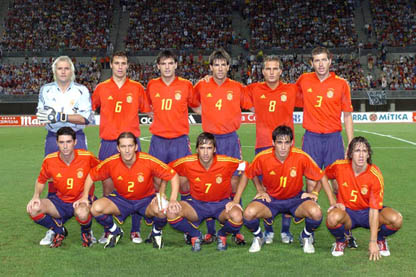