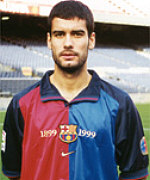 The 'noi' ('boy' in Catalan) from Santpedor near Barcelona has been a regular first choice for Spain since Camacho took over as manager.

Guardiola is the playmaker, the brain, and his precision passes are an integral part of Barcelona and Spain's strategy in midfield. Picked up by Barcelona's scouts at an early age, the club's first worry was to build up his slight frame to be able to resist the rigours of Spanish first division football. He therefore followed a strict course of body-building and red meat diets on top of his normal training, a course which now seems to be paying dividends.

A confident young man, Guardiola has appeared in his own TV show together with other Barcelona players on Catalan television, and has been club captain for several years. One of the few Catalans (or for that matter Spaniards) in Loius Van Gaal's team, he is seen as a symbol of Catalanism amongst local supporters.

Even then, he has been linked with English and other clubs as the Dutch manager has not always included him in his first choice eleven. Not a great goalscorer (he has only scored four times in nine seasons at Barcelona), his strengths are his vision, his defence splitting passing and his changes of play, and Barcelona are not the same team without his inspirational captaincy.

Prone to injury, he has not played as many games for his country as may be expected after making his debut against Northern Ireland in the 1992 World Cup qualifier. Although his creative style did not fit in well with Javier Clemente's more aggressive game, Camacho has been using him regularly, and if he is not injured he could play a vital part in Spain's plans this summer.