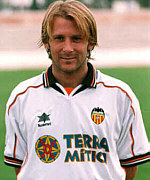 He probably won't play every match and he may not even get on at all, but if he does, watch out for fireworks from Mendieta.

The Valencia club captain came first and second in the goal of the year competition last season, and it was a toss up which of the two was better, his spectacular first time volley after a corner from the left which sunk Barcelona in the league, or his individualist goal in the Spanish cup final last year, juggling the ball with his back to goal, lobbing a defender (known as a 'sombrero' in Spain) and volleying first time into the net.

Mendieta is different from the typical footballer: conscientious objector, guitar player, the Basque born midfielder is a quiet family man off the field who prefers not to be in the public eye. He began his career at Castellón near to where his parents now live, but quickly moved to the bigger local club Valencia.

His start in the first team came through manager Guus Hiddink, who played him at right back, although later on he moved to his preferred position in midfield, usually playing in front of the defence. After his cup final goal he was the target of many big clubs, but decided to renew his contract with Valencia for another six years.

A late starter at international level, his first match came in March 1999 in the 9-0 drubbing of Austria during the qualifying rounds of this tournament. If Engonga is not on form, Camacho may give him a chance to ply his wares during the tournament.